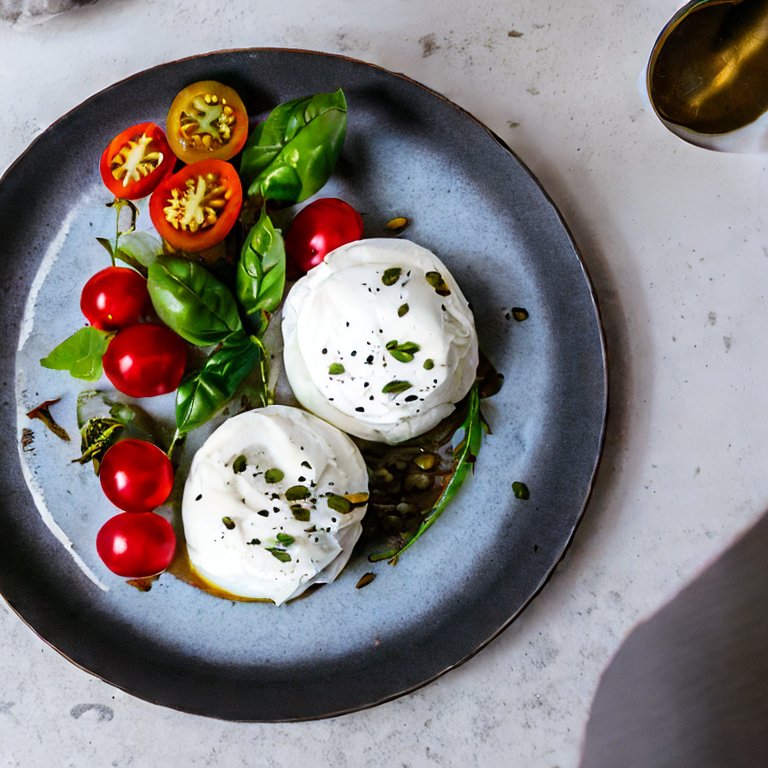 Vegan burrata is a plant-based version of the traditional Italian cheese dish that is made without any animal products. It is a delicious and creamy cheese alternative that is perfect for vegans or anyone looking to incorporate more plant-based foods into their diet.

The traditional burrata is made with cow’s milk, which is curdled and then stretched into a soft, creamy cheese. It is often served with fresh tomatoes, olive oil, and basil, or used as a filling for pasta dishes or sandwiches. (Learn more about Why Is Burrata Not Vegan or Vegetarian?)

Vegan burrata, on the other hand, is made using plant-based ingredients such as nuts, seeds, and plant-based milks. There are a few different methods for making vegan burrata, but the most common method involves soaking cashews or almonds overnight, blending them with water, and then adding in other ingredients such as agar agar (a plant-based thickening agent) or coconut oil to give it a creamy texture. (We have another burrata vegan alternative version that uses tofu instead found at Tofu Burrata Recipe)

One of the main benefits of vegan burrata is that it is a healthier alternative to traditional burrata. It is lower in saturated fat and cholesterol, and is free from hormones and antibiotics that are often found in dairy products. Vegan burrata is also a great option for those with dietary restrictions or allergies, as it is dairy-free and thus free from lactose and other common allergens.

In terms of flavor and texture, vegan burrata is similar to traditional burrata in that it is creamy and rich. However, it may have a slightly different flavor due to the use of plant-based ingredients. Some vegan burrata recipes also incorporate herbs or spices to give it a unique flavor profile.

Vegan burrata can be used in many of the same ways as traditional burrata. It can be served with fresh tomatoes, olive oil, and basil as a simple appetizer, or used as a filling for sandwiches or pasta dishes. It can also be used as a topping for pizzas or in savory tarts and quiches.

One thing to keep in mind when cooking with vegan burrata is that it may not melt in the same way as traditional burrata. It may also be slightly firmer in texture, so it may be best to slice or crumble it rather than trying to spread it.

Overall, vegan burrata is a delicious and healthy alternative to traditional burrata that is perfect for vegans and anyone looking to incorporate more plant-based foods into their diet. It is creamy, rich, and versatile, and can be used in many of the same dishes as traditional burrata. Whether you are a seasoned vegan or just looking to try something new, vegan burrata is definitely worth a try. Vegan burrata is a plant-based and dairy-free version of the traditional Italian cheese dish that is made without any animal products. It is a delicious and creamy cheese alternative that is perfect for vegans or anyone looking to incorporate more plant-based foods into their diet.
5 from 1 vote
Print Recipe Pin Recipe
Prep Time 2 hrs
Cook Time 20 mins
Cooling Time 2 hrs
Course Side Dish
Cuisine Italian

Note: If you don’t have agar agar, you can also use 1/4 cup of coconut cream instead. Just make sure to refrigerate the mixture for at least 4 hours or overnight to allow it to set properly.
Keyword vegan, vegan cheese